More often than not, turkey hunters are going to come home empty handed. Still, turkey hunting is more popular than it has ever been. Why? Most hunters are satisfied with their hunt if they have a turkey encounter of any kind. For hunters, more turkeys lead to more positive experiences in the field.

When hunters don’t see or even hear turkeys frustrations sets in. They look for answers. Oftentimes, hunters see coyotes, skunks or raccoons and begin to wonder if they are to blame. I took a friend on his first turkey hunt a few years ago. I spotted dozens of turkeys in this field the morning before.

But on this day we were turkey-less. We were about to make a move when I saw something moving toward us from a neighboring field. In the overcast conditions, it looked like it was possibly a gobbler moving in on us… and moving fast. 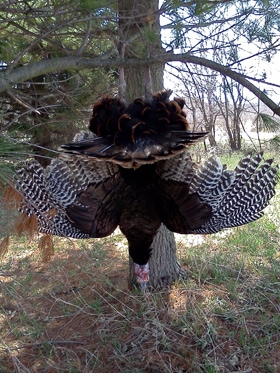 I instructed my friend to get his gun ready because it looked like this bird was coming in on a string. As it got closer, something didn’t look right. As it got much closer, I noticed the stripes on it’s back. This skunk was headed right for us and walked right past my friend. He could have touched it with the barrel of his gun. The skunk never knew we were there but my friend’s eyes nearly popped out of his head! That skunk was the only animal we saw that morning.

It would be easy for many to blame our misfortunes on the skunk or other predators on the landscape. According to Wisconsin DNR Upland Wildlife Staff Specialist Scott Walter, predators are just a small part of a larger equation. “Predators are always going to take their fill. But if the habitat is there, the birds will be OK.”

Walter and just about every wildlife biologist will tell you the problem with using predator control to bolster turkey population is the predators themselves. “As soon as you remove a fox, another one moves in. Then you remove that one and another moves in and has a litter,” said Walter. And that goes for coyotes, weasels, raccoons, and skunks too. “To have a positive impact on ground nesting birds, you have to remove an awful lot of mammalian predators. And of course, it’s impossible to remove raptors like hawks and owls due to international law.”

As quality habitat decreases, potential nesting habitat is concentrated. This makes it easier for predators to do what they do best. Adult turkeys are under attack, but it’s the young that are most susceptible. Raccoons, opossums, weasels, skunks, and snakes are notorious egg eaters. Larger predators won’t pass up an easy meal either. Once the eggs are hatched, poults can fall victim to coyotes, foxes, hawks, owls, and eagles.

While predator control isn’t the deciding factor in increasing long-term turkey populations, it can still be productive. In areas with a small turkey population every bit of assistance helps. But an effective control plan is labor intensive and expensive. Walter believes higher fur prices would increase trapper participation. More trappers in the woods would have the impact needed to decrease predator populations enough to affect turkey numbers. Unfortunately, higher fur prices are probably not on the horizon. Simply stated, the best way to diminish the effects of predators on turkeys is to provide top quality habitat.