Producing Your Own Hunting Show – Not As Easy As You Think

It seems like just about everyone is filming their hunts these days. The cost of cameras has dropped significantly and editing video can now be done on your home computer. Hunting shows have always been popular among hunters. The love of hunting mixed with the availability of quality equipment and the dream of hunting as a job has created a new breed of hunter. For these hunters, getting a deer isn’t good enough without getting it on film. Taking their videos to the airwaves just seems like a logical next step.

Who is Joe and JD?

Joe Sir and JD Huitt started filming hunts on two different paths. JD was producing hunting DVDs while Joe was creating online hunting videos. They met through a mutual friend and decided to work together to create Hallowed Ground Outdoors. The show is in it’s second season on the Sportsman Channel. The high production value sets Hallowed Ground Outdoors apart from your average hunting show. In fact, it won the 2011 Sportsman Channel Best New Series Award.

The duo lives seven hours apart and JD admits the partnership probably shouldn’t work but it does. “We found that we had similar styles, similar goals, and similar tastes. Everything clicked well. He would kick out an idea and it was something I was already thinking and vice versa.”

The quality of production work in the outdoor television genre is getting more impressive by the day. Hallowed Ground Outdoors has an extensive team throughout the Midwest. JD says most of the team shoots with Canon XH A1 cameras but several members are also using DSLR equipment. Joe & JD do all of the post-production work in house. They edit using Final Cut Pro. Joe says editing a show that meets their standards is a true labor of love. “It takes about two hours per minute of what you see and people don’t understand the deadlines that are associated with working with the Sportsman Channel and TV in general.”

Putting together 13 quality episodes takes time and commitment. Joe says Hallowed Ground Outdoors relies on a team of volunteers to get all of the footage that is needed. “We’ve been blessed with a great group of guys. We have about 17 guys who hunt and film and every single person on the team volunteers. We pay for our own tags, our own equipment, and our own gas. As far as getting all of that footage, it goes back to our camera school in the summer. We try to educate everyone and work on the things that we can improve on and the camera techniques that we are going to show... When I first started people said the team is where your greatest difficulty lies. We have been blessed with an incredible team from top to bottom.”

One of the most difficult parts of filming an outdoor television show is the inability to plan the action. You may film for weeks without seeing the right deer. However, there is still a lot of planning that goes into filming hunts. Hallowed Ground Outdoors isn’t a shoot ‘em up type of show. They tell a story within the episode and Joe says telling that story takes planning throughout the production. “In your head… you’ve got an idea of what could potentially happen and what is going to pan out… If we have a guy that needs to travel, we’re having them film hanging treestands and planting food plots in that area and all of the preparation so in case they do end up harvesting there we have got a storyline behind it. We try to do all of that going into the season.”

The guys at Hallowed Ground Outdoors put some very nice bucks on the ground but they don’t hunt intensely managed properties for days on end. Everyone who works on the show has a real job and most of them hunt on the weekends and try to save vacation days for when the action heats up near the rut. Joe says because of this, viewers can relate to their show. “We’re not hunting world class properties. We’ve been blessed to hunt some great properties but it’s family farms and it’s door knocking which makes it even harder.”

With so much emphasis on inches of antlers in today’s outdoor media, the pressure to kill huge bucks is incredible. JD says they don’t worry about tape measures. “Our basic philosophy on that is when we go out we’re looking for mature bucks. So if there is a four and half or five and a half year old buck and he’s a hundred and twenty inches and he presents a shot we’re going to try and take him. If he’s a hundred and eighty inches we’re definitely going to try and take him... Our show is more geared toward guys like ourselves who aren’t really gaining access to those monster buck properties. Our goal is really to just shoot mature deer. If you kill a mature buck, you’ve done something no matter what kind of head gear he has on him.” 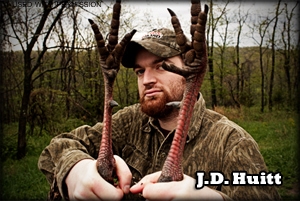 Filming an outdoor television show drastically increases the degree of difficulty of the hunt. You have extra equipment and an extra person. With that comes more scent and more movement. One of the biggest challenges is waiting for the moment both the camera operator and the hunter both have a clean shot at a deer. JD says team members need to work through what could happen before it happens. “That scenario has cost me a number of deer. My killing decreased exponentially when we started filming… Making a television show revolving around hunting redefines what success in the woods looks like. Success is no longer going out and filling your tag. You have to go out, fill your tag, and it has to be quality footage.”

A lot of amateurs will carry a camera into the stand when convenient but leave it behind when things aren’t going well. According to Joe, to be successful you must be fully committed to filming hunts. “You need quality footage, necessary content, and the kill shot on camera. Those are the three bullet points we go through in our heads before we allow ourselves to shoot something. It can be a tough thing if you don’t have those things… With the amount of time we have to hunt, having full time jobs and families, we can’t afford to have a missed opportunity or a deer shot off film. That dedication and commitment to only shooting things on film, even if it is the biggest buck you’ve ever seen in your life, is something that we really need to make a show.”

Shows like Backcountry Quest and Heartland Bowhunter have changed the look of outdoor television. The days of sloppy production work and canned product endorsements are over. Joe says the new style shows are a breath of fresh air for the outdoor industry. “We’re trying to show a different side of hunting and tell the story of who we are, what we do, and why we love what we do.” 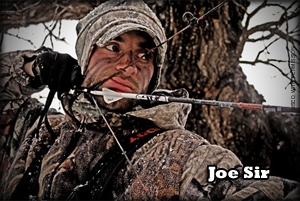 Putting together a great show is challenging. But securing sponsorship is probably the most difficult part of producing an outdoor television show, especially in today’s economy. Most shows purchase time on a network and have to sell advertising to recoup the investment. Joe says the costs are staggering. “People don’t realize how much a television show costs and what is involved and the work that goes into it. You have to pay the network a lot of money just to have air time. Every person and their brother is trying to film hunts, it’s everyone’s dream job! Companies are just getting hammered by it… We try to find companies that we believe in and that we feel like we can impact their sales and help them. Then, we’re just persistent about it.”

Getting on a network like Sportsman Channel isn’t easy. There is a huge monetary investment and quality standards also have to be met. “You submit a pilot episode and then they review that pilot episode and then say it’s either the quality they want on their network or it’s not. If it is the quality they want, the next step is looking at the time slots and the costs that reflect that. Once you get past that, it is recovering from the shock of how much it is going to cost! It’s a chicken and egg syndrome. You can’t get a sponsor to commit before you have a show and it’s tough to jump in and have a show and put yourself at risk without having a sponsor. For us, it was a leap of faith. It is an interesting process and for us it is a scary process.”