St. Charles, Mo — The king of bucks, the world-famous Missouri Monarch, was nearly overthrown a few weeks ago in St. Charles County.

On the evening of Wednesday, March 13, an antler shed hunter discovered a large, near-record set of non-typical antlers while searching the August A. Busch Memorial Conservation Area in St. Charles.

The shed hunter brought the antlers—which were still attached to the top half of the skull—to the attention of Missouri Department of Conservation (MDC) Wildlife Biologists, who examined them. 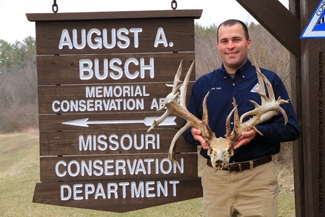 According to MDC Protection District Supervisor Scott Corley, a preliminary assessment of the antlers suggested the rack could yield a non-typical gross score in the low 270s under the Boone and Crockett trophy scoring system, and an unofficial net score in the low to mid 260s. The antlers had a total of 37 scorable points, along with an inside spread of 20 ½-inches. The final figures await official scoring in the near future.

MDC biologists said evidence suggests the antlers were from the remains of a buck that had died in late summer or early fall 2012. They judged the buck to be 5 ½- to- 6 ½ years old at the time of death.

As the result of high-quality deer management, the state of Missouri is a great place to find large bucks. In fact, the buck that still holds the world-record non-typical rack was discovered in North St. Louis County back in November of 1981. Known as “The Missouri Monarch”, the deer was found already dead with antlers that landed an incredible Boone and Crockett score of 333 7/8. The inside spread of its rack measured 25 1/8-inches and the antlers weighed 11 ¼-pounds.

The rack found last week at the Busch Conservation Area didn’t manage to topple the ruling Missouri Monarch. However, MDC officials estimate the antlers will still secure a place among the top five largest non-typical racks found or harvested to date in Missouri history.

No permit is required to possess shed antlers. However, since these antlers were not shed and still attached to the animal’s skull, the shed hunter was issued a disposition to legally possess the deer skull rack by St. Charles County Conservation Agent Becky Robertson. This allows for keeping the skull rack but not reselling it, or any other commercial use.

Buck antlers are made up of calcium, phosphorus, and protein. The antlers start off soft, and as they grow, they begin to harden. When growth is completed, the soft antlers become solid bone. Bucks use these as weapons when sparring with other bucks for mates and territory during the fall rut, or mating season. Come January, and through early spring, bucks begin shedding their antlers. This relieves the animals of carrying the extra weight and provides a source of minerals and nutrients for gnawing rodents.

Late winter and early spring is the optimum time for shed hunters to comb the woods and fields in search of a shed antler prize.

Occasionally a buck can grow an abnormally-shaped, or non-typical, set of antlers—like the ones found last week on Busch Conservation Area. Non-typical racks can form due to injury or unusual environmental conditions.

For the moment, The Missouri Monarch found in 1981 still reigns supreme. But the “August A. Busch Monarch” proves that Missouri—and the St. Louis area itself—has plenty of big bucks out there to challenge the throne.