One of my favorite all time hunts comes courtesy of the small but beautiful wood duck. My buddy and I were hunting Wisconsin’s Chippewa River on a slow October morning. The great thing about our spot was that you could see an honest mile down the river and ducks could easily see the decoys as they motored up the river. The morning had been slow with nary a bird on the strap when suddenly we spotted a formation resembling fighter jets headed right for us. They were wood ducks, six in all, on a string and headed for our decoy set. It was a little late in the day for woodies to be flying. They must have been spooked out of their feeding area by another hunter.

I clicked off the safety and prepared for the shot when suddenly they took a hard right turn into a backwater slough. Maybe they spotted something. Maybe they just wanted to be in the tighter confines of that slough. Either way, the trap was set. Trees created a canopy over the water they were sitting on. It was really just a natural canal that created an island point. I sent my buddy around the island with the boat. When I heard the motor go silent, I gave him a few minutes to get ready before walking in.

There were a few fingers of water to be checked. I know the area well and waited to push the canal last. The logic was if I push the canal first and the birds were in one of the fingers I would probably spook them out behind me. No birds sat in the fingers so I started walking up the canal. As I skirted the shoreline, suddenly wing beats erupted. My gun was able to drop the tail end bird as the others zoomed toward my friend. Ten seconds later two more woodies lay on the water near his feet. It was an unorthodox wood duck hunt. But effective nonetheless.

Wood ducks were once rare due to widespread logging and wetland drainage, but are now one of the most prolific ducks in North America. Habitat restoration and the popularity of wood duck houses are the main factors in the wood duck’s comeback story. They are easily one of the most beautiful ducks in North America. Both the drake and hen feature a unique crested head. The hen is pale grey in color. But the drake’s cap is a mixture of iridescent green, purple, and white. Wood ducks make a sharp two note squealing sound that sounds a bit like a baby whimper. Once you hear it, you will know the sound.

Wood ducks are usually the first ducks to fly in the morning. On clear mornings they are often in the air before legal shooting hours. If you want to shoot wood ducks sleeping in is not an option. But they occasionally fly during midday, usually because they are spooked by people or predators. Wood ducks roost in trees and fly down to their preferred feeding areas at first light. They usually roost in the same trees and establish regular travel routes. This makes patterning them possible for those who want to put the work in.

Scouting and hunting individual birds or groups of birds is effective. But I prefer to scout by finding good habitat and hunting the habitat. Flooded hardwood backwaters are perfect for wood ducks. If the creek or river is only twenty or thirty feet wide, set up right on the river. Blinds are not necessary. Just stand next to a flooded tree or sit against the bank to break up your outline. Wood ducks will rarely land in decoys but they typically give them a hard look. Six to ten decoys are all that is needed. There are wood duck decoys available but standard mallard decoys will do the job. 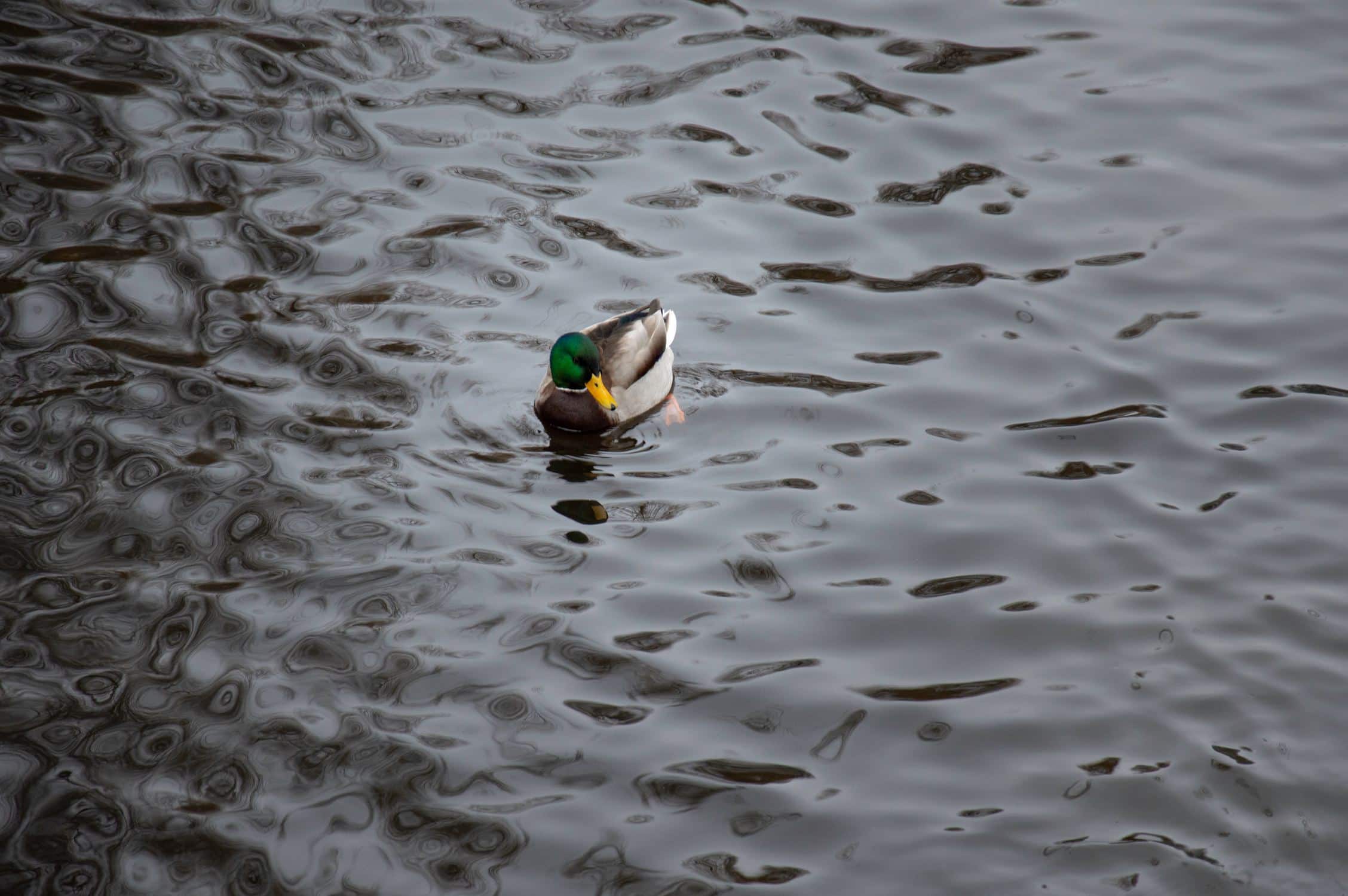 Another good tactic for small rivers and streams is jump shooting. Hunt the morning flight and if the action becomes slowly float a canoe or kayak downstream. If the water is smooth, look for ripples. As woodies feed they create ripples in the water that are easy to spot. Wood ducks will often hold tight to the waters edge in fallen trees and other thick vegetation. Sometimes they spook well before you get into range. But they will often wait until the last moment before taking to the air. If you look closely while paddling, getting close to them is common.

Flooded forests along with small rivers and creeks are typical wood duck hotspots. As long as there is good roosting habitat you will find woodies on big water too. Wood ducks are typically incidental birds in these situations but setting up along wooded shorelines will help your chances. Wood duck whistles can help get the attention of approaching birds. However, in most cases they will see the decoys before you see them.

The most important tool for wood duck hunting is quick wits. Wood ducks often fly over the decoys in silence. Given the wooded habitat, you usually won’t see them until they are right on top of you.