Longbows have gained popularity for hunting purposes, but also for the enjoyment of archery. They are named for their tall height, being roughly equal to the height of the user, allowing the archer a fairly strong draw.

With a variety of options out there for you to purchase, we’ve made things a bit easier for you by compiling a list of the best longbows overall, for hunting, for the money, and for beginners. Hopefully, after this article, you’ll be well on your way to finding the perfect longbow for yourself!

At a Glance: Our Top Picks for Longbows

Aspects to Consider Before Buying a Longbow

There are a few things you should consider before you go out and buy a longbow, like what accessories you’ll need to get with it, such as a bow stringer and bracer, and what kind of arrows you’d want. You should also consider the length of the bow you’re buying.

A bow stringer is used to for just that, to string the bow. Some people string their bow with their foot, however, it is suggested that you use a bow stringer to safely put our bowstring onto whatever type of bow you have. Another accessory you may want to consider investing in is a bracer. Your arm is near the trajectory of the bowstring, which can be surprising when it slaps the arm, which can lead to bruising. Wearing an arm guard is suggested if you’re new to using a longbow, so it can protect against direct contact with your skin. It is also important not to just look at charts that relate height to the longbow length. If you put three individuals of the same height together and compare their arm length, you’ll find that it varies. While height is important in determining the length of a longbow you should get, it’s also important to consider your arm length so you can get the best draw.

Selecting the proper arrows for your first longbow is crucial. You’ll have to understand the concept of an arrow spine and what will work best with your longbow, and it’s recommended you use manufacturer’s charts to determine the proper spine according to your equipment, arrow length, draw weight, and point weight.

Just looking for the top three best longbows? Here they are:

Review of the Best Longbows

Now that we've covered some of the aspects to consider before buying one of these, let's take a look at our top picks and see what makes them so unique. 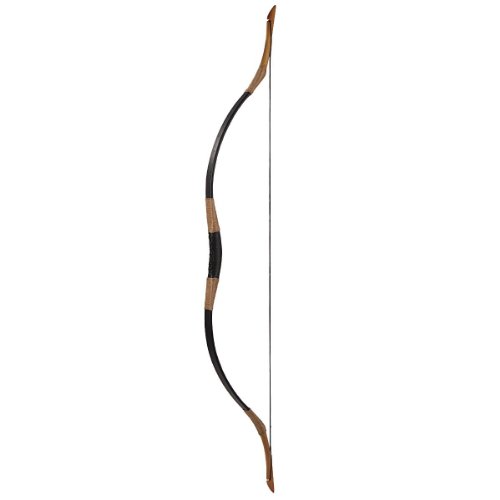 This specific longbow has a draw weight of 20-110 pounds and a bow body length of 145cm, string length of 131cm, draw length of 28 inches, and a safe draw length of 33 inches. An instruction book is included in the package which gives details on how to string your longbow.

With a sturdy build and handcrafted care, this bow is accurate and precise once you develop a shooting form that you can be consistent with. The traditional style can appeal to anyone who likes historical archery. Also, the smooth draw on this bow is sure to become a favorite.

Overall, this is a great longbow to invest in. The traditional style appeals to those who like historical archery, and a sturdy and carefully crafted build allows for accurate and precise shots. The price point is good considering the quality of the bow, though the string could be of better quality. You may need to experiment with a few different arrow spines and tip weights and you should expect to practice developing a consistent shooting form with a new bow. 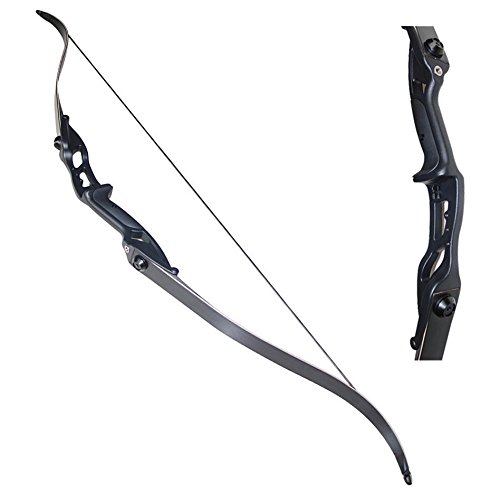 This longbow has a total length of 56 inches and a max draw length of 30 inches. Aluminum or carbon arrows with a length of 30 inches are recommended to use with this specific bow. Made with high-strength, casting aluminum riser, and nicely polished, this bow both looks as great as it performs.

A strong fiberglass limb made of maple stabilizes the bow and ensures accurate precision. This specific bow is designed for a right-handed shooter and the strings, bow stringer, rest, and other tools are sold separately.

A rubber grip ensures that you can securely hold your bow for better aim. Some modifications may be needed for this bow, such as a string silencer, as it tends to make a bit of noise, which of course, you wouldn’t want to happen during a hunt.

This is a great bow for hunting purposes and it comes at a decent price. Built with a strong fiberglass limb and with a high-strength casting aluminum riser, this is a durable and quality longbow.

Lightweight and fast, it shoots very smoothly, though it is suggested that you add a string silencer, as it can make some noise. This bow is also only designed for a right-handed shooter, which can be a drawback. Overall, not a bad bow, though it could rank better if it included the string and some tools as well. 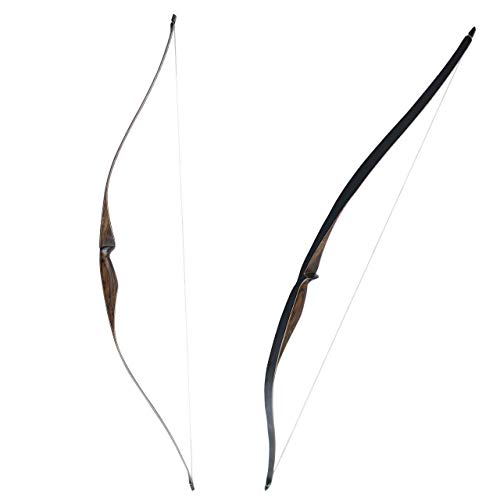 This longbow is designed to be held in your left hand and the string to be pulled with your right hand. This is different from bows for left-handed people, where it’s held in the right hand and pulled with the left hand. The bow length without the string is 54 inches and 52 inches with the string, with a string length of 50 inches.

The draw weight ranges from 20 to 25 pounds and this bow has a brace height of 7.5 inches. Lightweight and easy to aim, this is a good bow for beginners to use and it comes at a good price. The bow comes with the string, so all that needs to be done is attach it, so we suggest you invest in a bow stringer to simplify things, especially if you’re new to using longbows.

Overall, this is a great longbow for the price, and it’s relatively simple and easy to use. It aims well and is lightweight, perfect for a beginner. The string comes with the bow, so all you need to do is attach it, which can easily be done with a bow stringer. Keep in mind that this bow is made for right-handed individuals, meant to be held in the left and while the string is pulled by the right hand. If you’re a right-handed person, this isn’t an issue and this longbow would be a great purchase to make without breaking the bank. 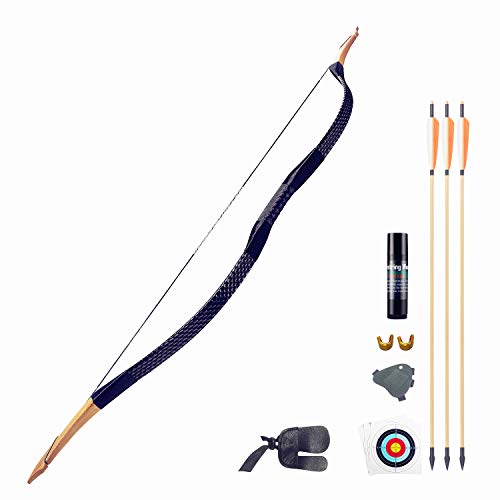 This longbow has a bow arm made of transparent epoxy and is wrapped in leather, making it both more delicate while also being durable. The bow handle is made of locust wood that is both polished and painted to reduce the wear and tear of the bowstring and this also gives it a waterproof effect.

This bow has a draw weight of 25 to 55 pounds and can be used by right-handed and left-handed individuals. With its sleek and simple, yet sturdy, design, it holds strong power and produces a fast shooting speed.

The purchase of this longbow also comes with a hand guard, finger guard, three paper arrow targets, three wood hunting arrows, a bow bag, bow string wax, and the bowstring. With so many additional items included, this is the perfect longbow for beginners. Its lighter build also makes it easier to draw, which is important for new longbow users so they can practice their form without being too shaky.

This is the perfect longbow for beginners, with an entire “kit” included so you can practice drawing the bow and shooting. The bow arm made of transparent epoxy is wrapped in leather, making it durable and light, which allows you to draw easier. The bow handle is polished and painted which reduces wear from overuse, while also making it more waterproof. Overall, this is the perfect longbow to purchase if you’re new to the bow game and it’s made for both right and left-handed individuals.

Below are the most common types of longbows:

This bow typically has a narrow limb, a deep core, and is usually over 66 inches long. This style of bow is also referred to as an American Flatbow.

The “hill-style” longbow is also known as an American Longbow and is usually a bit wider and flatter in cross-section, with a stacked handle.

These bows have somewhat of a D-shape when strung at brace height and when drawn. A reflex refers to something curving away from you, like the end of a recurve bow. Deflex means it is curved towards you. Most recurve bows have a deflexed riser and reflexed limbs.

Flatbows are named because of their flat limb in the cross-section and they typically have a wider limb than the other bows. They’re also more tapered towards the limb tips, based roughly on the Native American designs, and they can be mildly reflexed all the way up to a radical design commonly known as the “Hybrid” design.

There are many things to consider before you purchase a longbow, such as the bow length, draw weight, and even what type of arrows you should get and what accessories or additional items you may need. There are certain bows that are better to use for beginners and some are made specifically for right or left-handed individuals. There are also different types of longbows that can cater to different people’s styles. Some longbows may work for you right away, while others may not, but it’s important to practice your shooting form and take time to get used to the longbow.

You have questions, we have answers:

What is a Longbow?

A longbow is a large bow drawn by hand that shoots a long feathered arrow. They are roughly equal to the height of the user, allowing the archer a fairly long draw. Longbows were the chief weapon of English armies from the 14th century until the introduction of firearms.

How Far Can a Longbow Shoot?

Modern longbows have a useful range of up to 180 meters or 200 yards.

How Long is a Longbow?

A longbow can come in a range of lengths. The English longbow is about six feet, or 1.8 meters long and was used by the English and Welsh for hunting and as a weapon in medieval warfare. You’ll want to find a bow that is the proper size for you with the proper draw weight.

What is the Difference Between a Longbow and a Recurve Bow?

A longbow and a recurve bow are similar in that they are both fairly simple, consisting of only the bow and its string. However, a recurve bow looks different from a longbow because of the curve of its limb, or the ends of the bow.

The curved shape of the recurve bow gives the arrow more power when it leaves the bow. This allows the arrow to travel farther than it would if you were firing it with a longbow. The importance of draw length also varies between both bows. The draw length on a recurve bow is more important than on a longbow. The string on a longbow can be typically be drawn back as far as you are able.