If you have been following my articles, I have demonstrated several alternative ways to use Big Game Logic. In those articles I wanted to illustrate the versatility of the website and show people that BGL has many potential uses which are only limited by your imagination. However, I had a reason for putting off how to pattern deer until now.

My graduate research involves darting deer, and sometimes we want to target specific animals. For example, several of our study deer lost their collars last year due to a flaw in materials, so we are targeting deer that still have collars so we can change out the piece that consistently malfunctions with something a little more resilient. Also, if at all possible, we would like to recapture some of the deer that lost their GPS collars last year. We can identify these deer because they have ear tags but no collar. 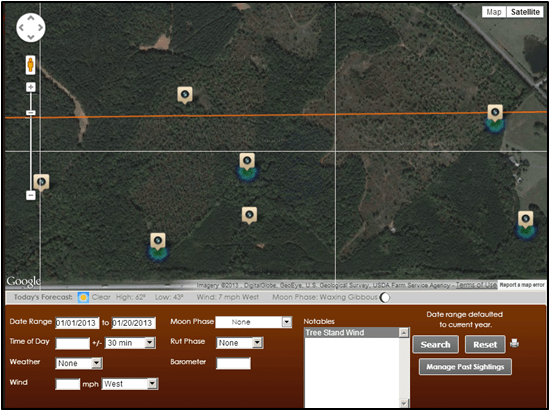 To accomplish this task, we have set up trail cameras at bait stations where we intend to hunt. As we get pictures of collared and ear tagged deer, we create notables and enter the data in BGL so we can start figuring out which bait stations each of those deer hits most frequently, and what time they hit it. I also created a notable called “Tree Stand Wind.”

Though this notable is not a deer, we developed a protocol using the “Tree Stand Wind” notable to help us decide which stands to sit at with any given wind direction (click here to see how). (NOTE: This work around is only temporary as we are currently adding a feature to BGL where the user can note on the stand which wind directions are preferred for that stand.  You will be able to query these stands by current wind direction to note which stands are good for current wind.)

Not only is this information useful for me, but also for my crew because we are able to share the data with each other and develop hunting strategies as a team. Hopefully in the weeks to come we can illustrate some of our success by sharing stories of how we used BGL to capture at least a few of our target animals, so stay tuned!

In the meantime, you may want to start building your map on BGL because the tips in the months to come may be just what you need to connect with some of the big bucks roaming on your own hunting grounds.